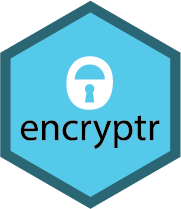 The motivation is around sensitive healthcare data, but the applications are wide. There are a number of packages providing similar functions. However, they tend to be complex and are not designed with tidyverse functions in mind. The package wraps openssl and is intended to be safe and straightforward for non-experts. Strong RSA (2048 bit) encryption using a public/private key pair is used.

It is designed to work in tidyverse piped functions.

You can install encryptr from CRAN and GitHub:

Documentation is maintained at encrypt-r.org.

The basis of RSA encryption is a public/private key pair and is the method used of many modern encryption applications. The public key can be shared and is used to encrypt the information.

The private key is sensitive and should not be shared. The private key requires a password to be set. This password should follow modern rules on password complexity. You know what you should do. If lost, it cannot be recovered.

The genkeys() function generates a public and private key pair. A password is required to be set in the dialogue box for the private key. Two files are written to the active directory.

The default name for the private key is:

And for the public key name is generated by default:

If the private key file is lost, nothing encrypted with the public key can be recovered. Keep this safe and secure. Do not share it without a lot of thought on the implications.

An example dataset containing the addresses general practioners (family doctors) in Scotland is included in the package.

Encrypting columns to a ciphertext is straightforward. An important principle is dropping sensitive data which is never going to be required.

Decryption requires the private key generated using genkeys() and the password set at the time. The password and file are not replaceable so need to be kept safe and secure.

Rather than storing the ciphertext in the working dataframe, a lookup table can be used as an alternative. Using lookup = TRUE has the following effects:

The file creation can be turned off with write_lookup = FALSE and the name of the lookup can be changed with lookup_name = "anyNameHere".

Decryption is performed by passing the lookup object or file to the decrypt() function.

The ciphertext produced for a given input will change with each encryption. This is a feature of the RSA algorithm. Ciphertexts should not therefore be attempted to be matched between datasets encrypted using the same public key. This is a conscious decision given the risks associated with sharing the necessary details (a salt).

Getting started: encrypt and decrypt files

Encryption and decryption with asymmetric keys is computationally expensive. This is how encrypt above works. This makes it easy for each piece of data in a data frame to be decrypted without compromise of the whole data frame. This works on the presumption that each cell contains less than 245 bytes of data.

File encryption requires a different approach as files are often larger in size. encrypt_file encrypts a file using a symmetric “session” key and the AES-256 cipher. This key is itself then encrypted using a public key generated using genkeys. In OpenSSL this combination is referred to as an envelope.

To demonstrate, the included dataset is written as a .csv file.

Check that the file can be decrypted prior to removing the original file from your system. Warning: it is strongly suggested that the original unencrypted data file is stored as a back-up in case unencryption is not possible, e.g., the private key file or password is lost

The decrypt_file function will not allow the original file to be overwritten, therefore use the option to specify a new name for the unencrypted file.

In collaborative projects where data may be pooled, a public key can be made available by you via a link to enable collaborators to encrypt sensitive data, e.g.

All confidential information must be treated with the utmost care. Data should never be carried on removable devices or portable computers. Data should never be sent by open email. Encrypting data provides some protection against disclosure. But particularly in healthcare, data often remains potentially disclosive (or only pseudonymised) even after encryption of identifiable variables. Treat it with great care and respect.